The top 5 movie shower & bathroom scenes of all time

Admittedly, there are some things which happen in the bathroom which should stay well and truly private, for all sorts of reasons, but nonetheless, such an important room deserves to have some iconic film moments. Therefore the team at www.anchorpumps.com took on the “difficult” task to find the top 5 scenes – (we bet the tomb raider shower scene must have been particularly trying to research guys!).

And so it proves, with our countdown of five of the top bathroom and shower scenes of all time, some cute, some not-so-cute and some downright scary!

5. Pretty Woman
The breakthrough role for Julia Roberts saw her playing against Richard Gere as a 'beck and call girl' to use her own words from the scene in question. Lounging in an enormous bath filled to the brim with bubbles which preserved her modesty, she sings, she haggles and a generation of men fell in love with her.

4. Jurassic Park
Fear affects everybody differently, and for the lawyer in this Jurassic Park scene, it involves running to the nearest toilet to hide. So when he finds himself at the mercy of giant dinosaur jaws, he couldn't be in a more vulnerable situation - even the T-Rex seems to be in on the joke for a moment or two. Then it gets nasty, at least for the poor gentleman in question. It's not the best way to go. 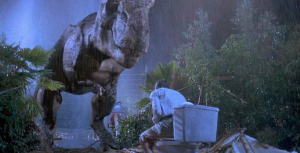 3. Tomb Raider
Based on the incredibly popular computer game franchise, this is a movie that divides opinion. Some people believe it really captured the look and feel of the original games while others felt the whole thing fell far short of its target. One thing that everybody agrees on though, is that Angelina Jolie has never looked better, and that the shower scene alone made the admission price of the movie worth every penny. A shower-drenched Angelina Jolie is seen posing before emerging through gauzy curtains, clad only in a teeny tiny towel - which she proceeds to drop!

Of course we were only looking at the impressive shower pressure when researching this one….

2. The Shining
Voted by Play.com as the scariest movie moment of all time, this iconic scene has gone down in cinema history. The moment Jack Nicholson takes an axe to the bathroom door at ‘The Overlook Hotel’ as a terrified Shelley Duvall screams hysterically inside is regularly cited as being one of the defining movies of director Stanley Kubrick's career. And the defining moment of the film has to be Nicholson's grinning leer of 'Here’s Jonny' as his face comes through the jagged door. It's the stuff of nightmares.

1. Psycho
A list of the famous shower scenes in movie history just wouldn't be complete without the most famous scene of all time. Known simply as 'the shower scene', the screeching discordant soundtrack and the repetitive sweeps of the knife plunging, puts this iconic scene at the top our list. So gory, Alfred Hitchcock chose to film the movie in black and white, this is the film that rewrote the rules for horror films – and admittedly made us look over our shoulder every time we took a shower!

If you’re looking to re-create your own shower movie scene, check out the full range of shower pumps available from Anchor Pumps!