Where in the UK has the best tasting water? (Expert Testing)

How much do you know about tap water in the UK? Our guide will get you up to speed and help you to think more about the pure stuff that flows out of your taps.

The best tasting tap water in the UK

The area of the UK with the best tasting tap water is Severn Trent in the West Midlands. Renowned for its purity, the judges, who included Michelin starred chef Tom Aikens, described Severn Trent’s water as “comparable to a mountain stream for its freshness”.

The award comes after the UK’s top water companies were judged head-to-head in a blind taste test. The taste testers blindly tasted the drinking water and the criteria for judging included: rating the water on purity, taste and appearance.

In second place was Anglian Water and in third place was Thames Water.

The area with the poorest tasting tap water is served by Wessex Water, including Bath and Bristol.

Why does water taste different?

Research shows that each area of the UK has water that tastes slightly different - as evidenced by the taste test above. But why does the water taste different? And why are some people so offended by another area’s water, when other people don’t seem to have an issue at all?

Well, the mystery behind the taste could be due to what we call hard water.

Hard water is water that has a high mineral content. It’s formed when water percolates through deposits of limestone and chalk which are largely made up of calcium and magnesium carbonates.

Some people claim that the high mineral content taints the water and gives it a distinctly “hard” taste.

In fact, if you live in a “soft water” area and you visit a “hard water” area you will probably be able to make out a distinct taste difference in the two types of water.

People who live in hard water areas may grow up having no idea they’ve been drinking mineral tainted water all their lives.

There are no known negative effects of hard water on human health and, in fact, hard water tends to contain higher mineral levels and can have health benefits.

However, it can lead to scummy tea and limescale on kettles. Shower screens also tend to get scummy, pipes can experience build-up and people report that their hair looks duller when they wash it using hard water.

It also has a particular taste which is very noticeable to people who live in soft water areas. Hard water can be improved taste-wise by using a simple home water filter. You can also install mechanical water softener units or use water softening products that contain baking soda and borax.

The best and worst water supplies in the UK

When it comes to water hardness, the M4 corridor is particularly bad. This includes London, Reading through Swindon, Bath and Bristol. This does correlate with the taste test results above.

The home counties including Kent, Surrey, Hertfordshire and Berkshire are some of the worst hard water areas in England too.

The ten worst areas for water supply in the UK are:

Take a look at the map below. The map shows you the milligrams per litre of Calcium carbonate (CaCo3) in water by region. As you can see, the southern regions, particularly to the east, suffer quite drastically from water with a high mineral content.

Compare the southeast regions to the sparkling waters of Scotland and North West England. Upon further research, Scotland actually has mineral content levels on par with that of the French Alps. 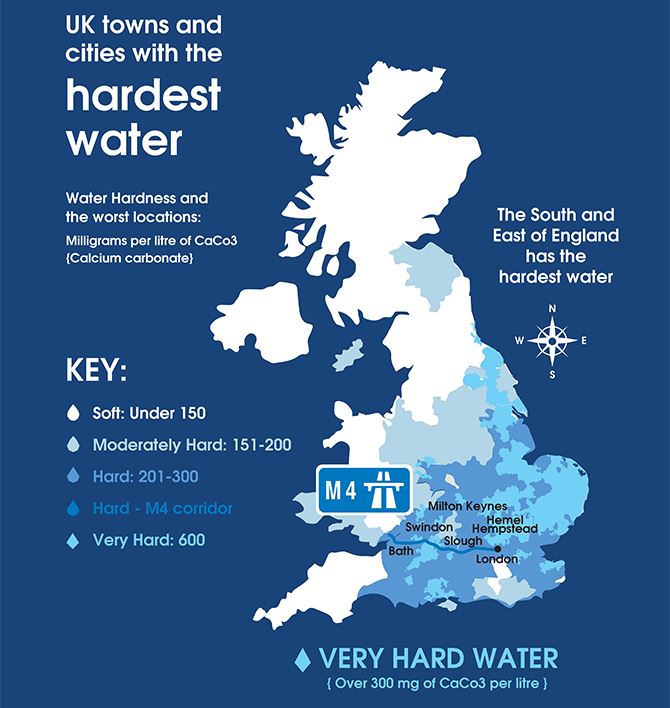 What about Water Fluoride?

Another reason that our water tastes so different when comparing various regions is Fluoride.

Fluoride, a naturally occurring element, is added to the spring water in some British areas to boost dental health and cut levels of tooth decay.

This is determined by local authorities, and there are schemes in place across parts of the North East, West, East and West Midlands, parts of Eastern England and Yorkshire and the Humber.

In some areas of the Midlands and the North East, the water supply has sufficient naturally occurring fluoride in comparable levels.

Is bottled better tasting than tap?

This debate has raged on for years, but a recent survey suggested that tap water is now winning. However, the popularity of bottled water is still high, with the average British customer drinking around 40 litres of bottled water annually, making the industry now worth over £2 billion.

Yet, surveys have suggested that the average customer can't tell the difference between bottled water brands and tap water, especially if it has been filtered at home.

Hard water also contains minerals such as calcium and magnesium, which would otherwise come with a heftier price tag for a bottled artisan water variety.

How do the costs stack up?

Research suggests that the average consumer will spend around £20,000 in their lifetime on bottled water or other associated drinks. Compare this to a litre of tap water, which Thames Water has calculated costs around 0.097p - equating to 1p a bucket. This means that a bottle of distilled water costs a whopping 500 times more than pure tap water. This is similar to paying around £1,500 for a glass of wine or a pint of beer.

Interestingly, those expensive coffees, lattes and commercial drinks that you buy from fancy coffee and drinks chains tend to use tap water - and 90pc of the resulting drink will just be tap water. Again, are you suddenly less inclined to pay £3 or so for the product?